Hi everyone! This week I made lots of progress, the character model is almost done. The game was fully playable  on a keyboard until I bought a new S3 Mini smartphone and started testing on the device.

– First with an analog stick: The movement was hard, and the thumb almost always lost focus when you’re trying to look at the character and at the controller at the same time. It was very frustrating to complete the first level. 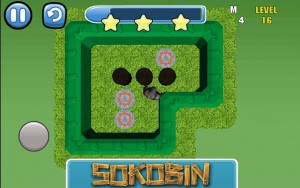 – Then I tried a digital joystick using two thumbs. For a single touch on any arrows  was really easy to use. I got serious problems when touching multiple arrows like up and left at the same time. The controls are a mess.. I got a similar problem as the analog stick. Of course, I could try polishing the controls until I get a perfect interface but still it’ll never be an interactive and fun game to play like this. 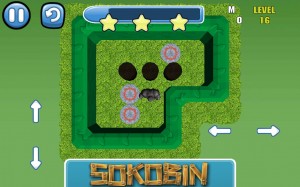 – Well, after getting very frustrated on the mobile interfaces, I stopped for some research on games like Cut the Rope and Where is my Water which are on the top 10 best games on Android for maybe more than an year. The thing that made those games fun to play besides the game concept and graphics is the interface.. Today mobile players don’t like complex interfaces with joysticks and buttons.. the game should be graphical and interface intuitive. This week I’ll work hard on this kind of interface. I’ll be using A* Pathfinder algorithm to find the routes when the player click in the level for the best route and a drag & drop on the boxes to the destinations.

This is going to be really hard, but I’ll manage somehow!